On Thursday,August 25th my Mom went in to have a heart catheterization done and they removed clots and inserted a stent. She had some complications that night, very low blood pressure, bleeding and back pain, so they kept her until Monday, August 29th, my sister brought her home. My Mom had previously experienced some chest pain and when admitted to the hospital she was given a nitroglycerin pill which helped the pain. Tuesday, August 30th, around 10 am, I took Mom to the pharmacy to fill her prescriptions,she had already been having some chest pain, and asked for a nitro pill (one of the scripts being filled), she was given a pill with no positive results so she asked for a second pill, no relief with that pill either and she requested a third pill to which the pharmacist suggested taking her to the hospital, which I did. The small hospital in the small town where we live did what they could, gave Mom two shots of morphine that really didn’t help much with the pain and then gave her a shot of demerol which helped to knock her out, but she still grunted and groaned and grabbed at her chest. Finally, at about 2:30 in the afternoon, she was transported out of the small hospital to the large hospital, about an hour and a half away. My sisters and I were informed that Mom had a massive heart attack and that she has loss of the front heart muscle. One sister lives near Orlando and the other sister is in Texas, the nurse suggested that the family should come visit, Mom is very sick. That was on Thursday, and my sisters, Aunt and cousin did come to visit. Mom looks so much better than she did on Thursday, and I’m glad family did not see Mom that day. On Tuesday, September 6th, I went to Health and Rehab here in town, to fill out her paperwork for admittance, we expected Mom to come home that day. She started having chest pain that one shot of morphine and nitro helped alleviate, but they would not release her from the hospital. Hopefully today, Thursday, September 8th, she can get out and go into rehab and get better!

After a morning of doing some running around, my Mom wanted us to go eat lunch at Huddle House, her treat. We both ordered items off the lunch menu and the total for the bill was almost $11. My Mom starts eye balling the little jelly-caddy that is on the table and asks me if I know how many grape jellies might be there. I said I didn’t know and asked her why she didn’t just buy a jar of jelly and she says it’s cheaper this way. She just payed $11 for our lunch! That would buy a whole lot of jelly! So, does getting older turn you into a grape jelly thief???

I have not had the pleasure of meeting too many celebrities, but I did have the chance to meet Jani Lane in Orlando, 1993. I can’t remember the name of the event going on, but downtown was closed off and there were numerous bands playing in the streets, I do believe it was in November. Jani Lane and another guy were performing acoustic. I was a big fan of Warrant and was so excited to watch Jani play, those gorgeous blue eyes! They finished performing and I had the opportunity  to speak with Mr. Lane and get an autograph. Of course I gathered the courage to ask about hanging out backstage, he was nice enough to let me know that I didn’t want to do that, I was young and didn’t know any better. I still had an amazing time and have, what I think to be, a pretty cool story to tell, thank you! May your soul find peace, and know that your fans still love you!

I have found out that I suck at cooking rice! It always come out sticky no matter what new idea I try! From now on I think I’ll stick with instant rice, something in those boil in bags would be great!

The kids started back to school today, and that fact makes for a mixed bag of emotions. I’m happy for the alone time I am finally getting, but then again I’m sad, my 16 year old son is now a Senior! Class of 2012! Oh how time flies! I love my kids more than anything, even if they think otherwise. I want the best for them and I hope they grow up to be happy, well adjusted adults. Even tho this Senior year makes me sad, I am gladly looking forward to May 2012 to watch Brian and and his classmates do the Senior walk! WE LOVE YOU BRIAN!!! 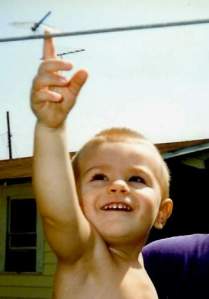 So, on Friday my fourteen year old daughter posted a Dane Cook video on Facebook and said he’s funny, I commented back with “That and he’s hot!”….I think she is either shocked or embarrassed to think that her OWN MOTHER would even consider thinking that any man was as hot as her Dad! Actually the thing that gets her is that I posted it for “the whole world to see”! Well, her Daddy likes Cindy Crawford and Sandra Bullock, so I think I am entitled to enjoy Johnny Depp, Hugh Jackman and Nicolas Cage, right? Oh, and Dane Cook!

Death of the crazy water meter!

Apparently the new water meter works just fine, we just needed to fix the leaky toilet. The toilet that didn’t leak so much until disturbed crud started working through our lines. Oh well, it’s nice to know that our water bill won’t be outrageous and the yard will stay intact all due to the death of the crazy water meter. Next blog will more than likely come as soon as I figure out why my sister is sleeping in potato chips!

The crazy water meter problem has been solved! Water started bubbling up IN THE ROAD, which means it was not OUR problem to fix. Our toilet works SO much better now that the city dug up part of the road to fix the problem on their side…

So, the city has decided to put in new water meters, they contracted the job out and there was one guy digging up the area for the meters and the other guys were replacing the meters. It was finally our turn to get a new water meter and the lucky guy who was installing our meter seemed to be having problems with the installation. Needless to say, once he was done installing the new meter, we have half the water pressure that we had BEFORE they changed the meter out and the meter is spinning like crazy! It now takes about twenty minutes for the tank on the toilet to fill up after a flush! We called the water company and they sent one of their guys out to look, he said the valve was turned on completely and of course kept trying to imply that it must be a leak under the house. NOT the case, everything had been fine until the new water meter was installed. The city is supposed to come back by today and look to see if there is a water puddle somewhere that would indicate some leak in the line, I noticed that not long ago they did come by and look at the meter, I guess checking to see if it was still spinning out of control. Hopefully they will come to see that we had NO problems until this new meter was installed and we will not have any out of pocket expenses from this CRAZY WATER METER!